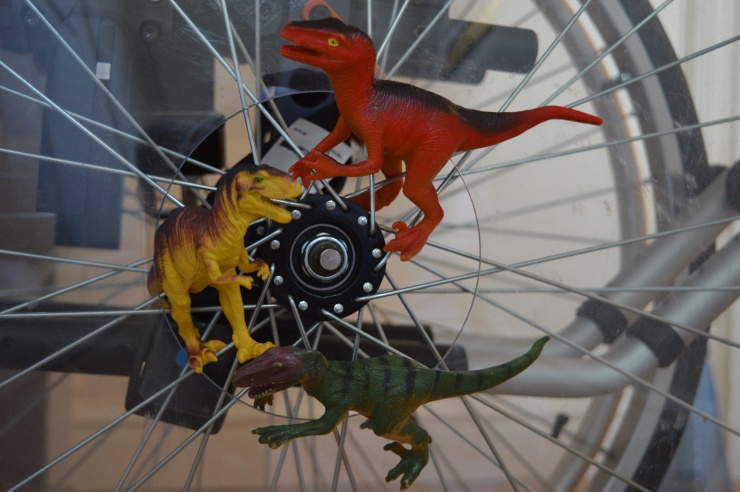 I’ve had use of my wheelchair for a good few months now, which means I’ve had plenty of opportunity to take it out for a spin and suss it out. As predicted, using a wheelchair while you still have very young children isn’t terribly practical. In fact, using a wheelchair while you still have very young children is rather like trying to herd a litter of flighty kittens along a narrow cliff edge while being harnessed to a chair, the movement & direction of which you often have little control over. And so I thought I’d run through the factors at play when using a wheelchair with my sprogs in tow, you know, just for fun. I should mention that I am not a full-time wheelchair user, which will explain much of what follows.

Toddlers tend to toddle – you never quite know which direction they’re going to take and will be consistently amazed by how fast those little legs can toddle off. When my littlest sets off, I’ve been known to arm it after him in my wheelchair, self-propelling those wheels as though in contention for Paralympic gold.

Children swerve – they don’t walk in a straight line, and they certainly don’t watch where they’re going; hence the frequent yelps of pain as my wheelchair clips their feet from behind, usually because the person pushing me can’t see them. While I’m pushed along, I am forced to flap my arms in a bid to bat the kids out of the way and so save them from the jaws of my mobility monster.

The pusher lets go – When you’re at the mercy of the person pushing you anything can happen. For a start, I never get pushed along the path I’d choose or at the speed to which I intend to go – and then there’s the possibility that the pusher will suddenly relinquish control of the handles in order to catch a runaway child leaving me to career, unnoticed, down a descent of death.

Along similar lines, children want to do the pushing – and when you give in, which you will inevitably do, you will find out just how it feels to be poor old Teddy Beddy Bear on one of his many hair-raising circuits of the house in which he has been bundled into a small pink pushchair and thrown unpredictably in all directions until all interest is lost and he is abandoned to career down, you guessed it, the descent of death.

Where’s all the storage? If, like me, you are used to the luxury of pushing around a state-of-the-art stroller for the last 6 years you’ll sorely miss all those special features that make out-and-about life so much flippin’ easier. Where is all the under-seat storage, where are the hooks, the cup holders, the rain cover, the kiddie ride-on platform, the reclining seat and the sun canopy? Children come with a lot of baggage – literally. Switching from a super duper iCandy stroller to a not so super, but still pretty duper, wheelchair means that storage becomes an actual nightmare. We end up with bags upon bags upon coats upon coats all hanging from the un-bag-friendly handles and jabbing me in the back while simultaneously rubbing against and getting caught up in the wheels. The back of the wheelchair ends up so top-heavy that the whole thing capsizes if I so much as attempt to get out of the thing. I usually end up with coats and bags dumped on my lap, which, if I’m lucky I can just about peer over the top of; that’s if the kids haven’t already commandeered my seat (see below).

The kids want a ride – I suppose I shouldn’t complain when my 2 year old clambers onto my lap as I’m being wheeled along, after all, he has had his pushchair taken away from him earlier than we would have liked due to the awkward logistics of having only one pusher and two pushees. I suppose I shouldn’t be all that surprised either when my 4 year old clambers on too, after all, her little legs are barely any longer than her brother’s and it must be awfully tiring for her having to walk everywhere. I will, however, reach my limit (as well as lap space) when my 6 year old decides that he would also like to hitch a ride. It is usually at this point that I admit defeat and let my husband push the three of them as they fight it out for space, leaving me to limp pathetically along behind them.

There are various other little niggles at play too, including the endless crumbs, the squished bananas and half-eaten biscuits that are left in a child’s wake post-‘ride’. Their dirty little shoes will leave a trail of mud on my lap, where they will have invariably been sitting. If it rains you get wet. Very wet. People gawp. They gawp at the sight of a young person using a wheelchair and they certainly gawp at the sight of 3 children squashed in a wheelchair together. And, one of my biggest gripes – on reaching any destination my husband will merrily chirp, “Where shall I put you?”, a saying that he likens to finding a home for a beautiful vase but feels to me as though I were a bag of rubbish waiting to be dumped somewhere out of the way.