Many people would argue that it was time to see a doctor the moment I realised that the pins and needles had been buzzing away for a solid 2 days. Why the heck did I wait until the tingling had spread throughout my body, turned my feet into numb weights, made it painful to walk and rendered me a physical mess? It’s a tough one to justify, but I suspect I just found the whole thing too weird. Plus I may have been in a state of denial – it never occurred to me that there was actually anything wrong; whatever it was would surely pass. Oh joyous blissful ignorance! Besides, I was so fit and healthy that it couldn’t possibly be anything serious. In fact, I was so fit and healthy that I wasn’t even registered at a GP surgery! My childhood surgery had kicked me out when they got wind that I’d moved out of town 2 years earlier. Apart from Dr Brother, doctors simply didn’t figure in my life … oh ho ho, how that was about to change!

Monday 19th April, 2010 – a day trip to London to see my family and to enjoy ‘Wicked’ at the Apollo Victoria Theatre. As I prepared to make the 2 hour train ride into The City I couldn’t help feeling a bit distracted. The pins ‘n’ needles and the numbness were still raging through my body and I’d recently had to cease use of the treadmill at the gym; the pounding of my feet was sending shockwaves through my body with every step and I’d begun to lose my balance and stumble – not safe! That weekend I’d been experiencing a tingly face, the tingles came in waves, spreading from my mouth and up along the left side of my face. By Monday morning my speech was slurring as if I’d suffered a stroke. The slurring would occur about every 15 minutes and my mouth would tingle as a warning sign so that every time I felt the tingling start I’d stop talking for a minute or two.

I still hadn’t told anyone about my symptoms – the beauty of this invisible condition meant that no-one realised there was anything remotely strange going on! Coming from a medically minded family, however, meant that I would have to face reality sooner than later. And all it took was for my mum to overhear the words, ‘numb feet’ across the dinner table during our pre-show meal in the West End for the ball to really start rolling. “NUMB FEET?!” she yelled for all to hear, “What do you mean you’ve got numb feet?!” And that was that, I was as good as marched down to a doctor’s surgery there and then – or at least as soon as I’d survived The Wicked Witch of the West, got the train home, worked 3 days and found time to source a nearby surgery that would take me and give me an emergency appointment. That day came on Friday 23rd April, St George’s Day. Experiencing a rare bout of patriotism I busied myself making St George’s Day cakes while I waited for my 3.50 pm appointment to arrive.

As has been the case with all the health care professionals throughout my MS ‘journey’, my sparkly new GP was a true gem. Concerned and compassionate, he didn’t make me feel at all bad for wasting his time, which to my mind I was surely doing. It was a pretty straight forward appointment – I was weighed, measured, blood pressure-d etc Lots of questions were thrown at me, the one that sticks in my mind the most was, “Is there any history of stroke in your family?” That was honestly the first time that I thought there may actually be a real problem. Flip! Could I really have suffered a stroke? I was told to book a blood test and to see him again in a fortnight to look at the results.

Wednesday 28th April, 2010 – The day my 1st Godson was born and the day of my first EVER blood test. How had I managed to reach the age of 27 without ever needing a blood test? I was terrified! I’d heard horror stories about blood tests and had decided that I could manage to get through my entire life without having one. Little did I know that this would be the first of many many many blood tests. Due to my medication, blood tests have become a routine part of my life – and they don’t bother me in the slightest. I have no idea what my blood was being tested for but when I went in for the results 2 weeks later there was nothing to report (no surprise given that MS cannot be diagnosed with a blood test!) My symptoms had of course become much worse by this point. My slurred speech was making my job a real challenge, but I still managed to hide it from everyone – I sat myself in a corner of the office and remained silent as much as possible.

The spasticity in my legs had gone through the roof. My daily workout at the gym had become almost unbearable, but I soldiered on stubborn as ever. I lived in a first floor apartment that had a wide winding staircase leading up to it from the communal front door. Ever since we’d moved in 2 years before I had played a game with myself whereby I would race up the stairs 2 or 3 at a time to ‘beat’ the slam of the front door closing behind me. One day in May the door beat me for the first time ever. My legs would not work; I could no longer run up the stairs. I found myself instead clinging to the stair rail and heaving my heavy feet up each step in a slow and painful climb – naturally there was a lift in the building, and naturally I didn’t use it.

I had now been referred to a Neurologist and while I waited for my appointment I immersed myself in the wonderful world of the Norfolk and Norwich Festival. Kurt Perschke’s RedBall became one the highlights of my summer and I delighted in following it around our beautiful city.

Photo: Me playing with the RedBall… Teetering on the edge of Limboland 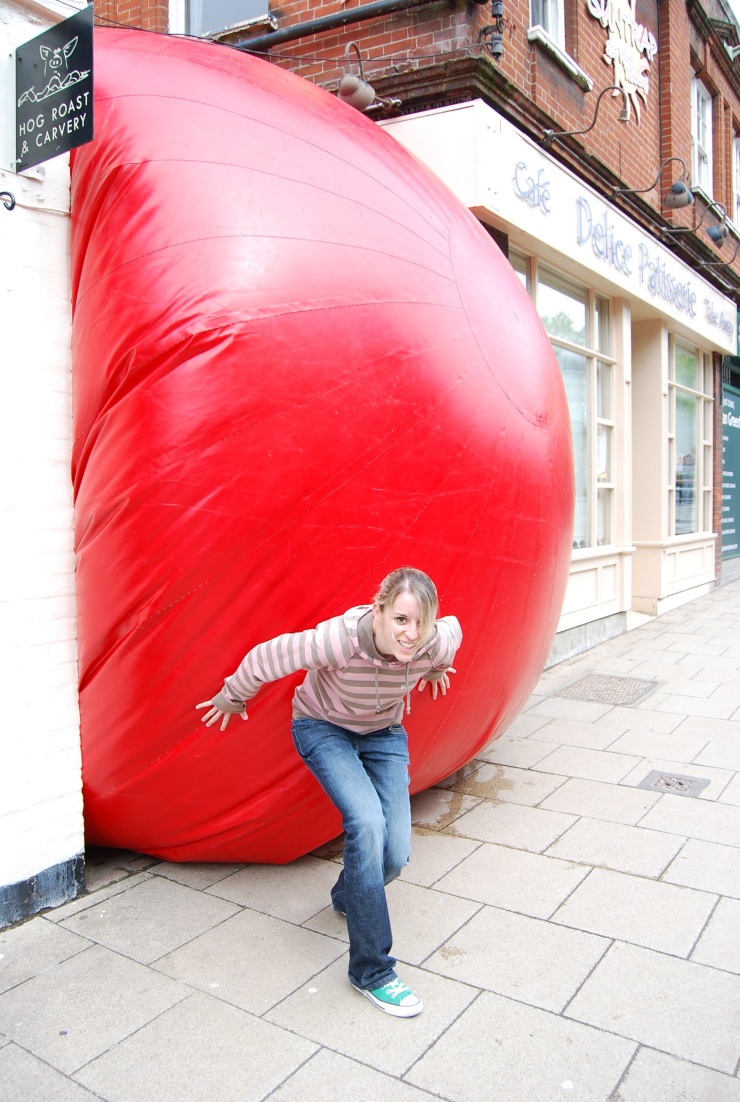 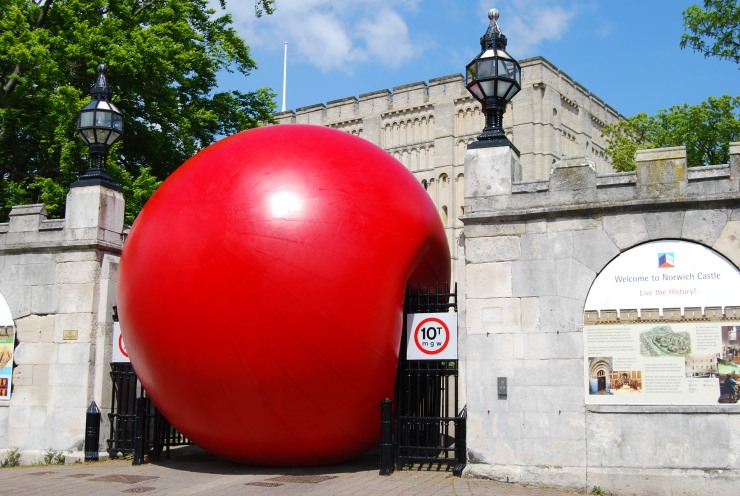 7 thoughts on “How It All Began – Part Two: Time to See a Doctor”